We gathered our dogs for the breeders ’class so we wouldn’t miss that, and then once again went to the prejudging ring. One can understand that we became quite surprised when they pulled Stefan into the ring with the brace class! They were allowed to compete!
The brace went superb and became Best in Show 2nd among almost 20.
Next class was breeder’s class and here it also was many participants. Stefan walked in the middle and drilled us: ”1-2, 1-2, 1-2 ­ down ­ show the dogs ­ smile! Up ­ 1-2, 1-2, turn, 1-2 ­ down ­ show the dogs ­ smile!!” But we got paid for the job! Our breeder’s group was placed as 2nd Best in Show! I must say that this was one of the largest things I have experienced ­ the feeling was undescribable. Joy that the judge liked our dogs and happiness because we got to share this moment together ­ Stefan, mom and I.
When we returned to our hotel the dogs and we just lay on the beds and relaxed for a while enjoying the day. But one can not relax for too long and soon we were all on our way to have dinner. It was a wonderful evening and suddenly the entire centre of Porto was filled with people, young as well as old. The cars drove around and honked their horns. It was a huge party for everyone and it was quite noisy.
We told each other: ”It is incredible that the entire city of Porto is celebrating us!” Well, that was not the case. The thing that had happened was that the city’s soccer team had won the national cup! We can assure you that the Portuguese people really know how to party – it kept on most of the night. The day after the show was a nice and quite day. It was wonderful just to walk around and sightseeing, sit at a café and take a beer or two. This was a day just to enjoy life.
Our plane was leaving early next morning and it was almost in the middle of the night when we left our hotel and went to the airport. We had no troubles to get our trolley and dogs with us this time either. But we did meet a couple of more or less hysteric Americans and Mexicans which despite they had made reservations (and in some cases even paid for it) were not allowed to bring their dogs with them! What a nightmare. After a while everything seemed to work out well, but yet! I don’t know what I would had done if there had been any problems with our dogs.
One thing that we have learnt is that it’s not enough to check once (or twice) when travelling with dogs!
The trip from Portugal went as well as the way down, and now the dogs were used to flying ­ because they had already made the trip once! 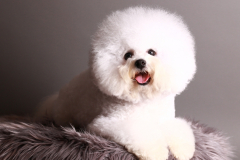