The third weekend in March there was a big show in Sweden . It was time for the Swedish Winner show, which was held in Malmö this year. Almost 5900 dogs had been entered to the show making it the largest winner show organised by a local kennel club in Sweden . As usual it was a busy time at the Harde family; visitors from the North of Sweden, Cattis who was very much pregnant and 14 dogs that had to be taken care of before the show. With some difficulties it was organised that Jaana from Finland , i e Håkan’s, Annika’s and Lara’s breeder and also Andreas’ Godmother, came and helped out. First we thought this should be a big surprise for Cattis but as time passed I understood it would be better to tell her – and I can tell you that she was relieved that she would get some help. Jaana arrived Friday morning and she and Cattis began to groom dogs as soon as they had been bathed! Because on Saturday there was a toy show held in Denmark so early in the morning I, Marita, Stig, Lillemor, Lars and Ann went there. At the show we met Luna with Mollie (Berit’s daughter). Gunnar Nyman, Danish breed specialist, judged the bichons and we had a great day! Zimon won champion males as well as best male, Wictor was second in junior, Knut won open as well as the Danish CC. Tindra won champion bitches and Mollie was second, Lara won her class and was best bitch. Berit was best veteran. Lillemor’s Zimon was then BOB and Lara BOS. Our breeder’s group was best group in the breed and got prize of honour. When the judging had finished it was time to eat! And it was all very delicious. Stig had made hot dogs and they were very much appreciated by all of us. We took the dogs out and as usual they enjoyed the excitement. Berit was clever enough (as always!) to place herself close to someone that would constantly pat her. In the finals we did brilliant! Our breeder’s group with Zimon, Tindra and Knut was BIS-1. Berit was BIS-2-veteran. Lara was BIS-3-BOS. And when it was time for Lillemor and Zimon we all hoped they would do well! The BIS-judge was from Sweden and he had liked Zimon before so we kept our fingers crossed for them… All the dogs were judged and four was chosen to be placed and among them was Zimon! In the end there were two dogs left and finally Zimon was BIS- 2 in a very strong line up. Three of the dogs were from Sweden and two of them from the Northern parts of Sweden . After the show we all went back to the car and travelled back to Höllviken were the others still bathed and groomed dogs for the show on Sunday. 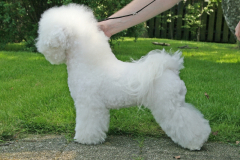 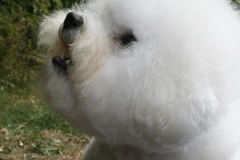 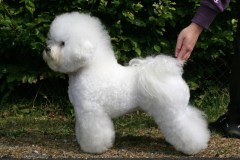 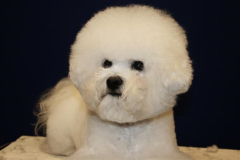 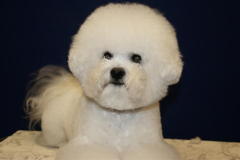