We left Sweden during the night of August 3 rd and we reached Neussen in Germany in the afternoon after driving 650 km . The Harde family had told us how beautiful this special place is, but it’s not easy to really understand until one has seen it in real life. They were right, however! We drove the last kilometres through forest, forest and forest – it was like driving in a green tunnel, and suddenly it opened up and one could see a wonderful landscape. In front of us we had fields and in the middle there was a beautiful building, which was the hotel. We were 15 happy travellers that had left Sweden and Denmark to go to Neussen and celebrate Gabi and her Tiffany, who had become the most winning bichon in Germany in 2006. At the same time we had also entered our bichons to the two shows that were held there during the weekend. When we had been installed in our rooms we all met in one of the bungalows. In this particular bungalow there were both Swedes and Danes. The weather was nice and we could all sit outside and have dinner together.

Jan and Lena arranged a really good barbecue with really good meat and Gabi and Stefan (a friend of Gabi) had brought special German sausages, which we also ate. It was really good and we also had lots of fun together. Since everyone had been up really early we were all quite tired and went to bed early. Saturday and it was time for the first show. First we took all the dogs for a walk and then it was time to prepare them for the show and after that we could have a really good breakfast buffet before the show began. It felt very luxurious to only have 25 m to walk to the show ground. Since we were so close we left for the bungalow as soon as the breed judging was finished and then we could relax in the bungalow until it was time for the finals. It was great to sit in the sun and enjoy Stig’s homemade cookies and the good coffee that Inger had made.

In the evening there was a joint party for all the participants in the show. You can imagine that we made a great stir when we, the ”Swedes” as all called us, came to the party and began to organise the tables so all 17 would be able to sit together. Just imagine, a beautiful evening, tables out in the garden, among the tables a nice buffet with barbecue and different salads, cheese and so on. Really good! Before it was time to hand out the prizes Stefan held a speech. He held a speech in German in which he, among other things, thanked for the nice evening and for all the help we’d got to come to the show. Thank you Stefan for your words, your consideration was much appreciated. Then it was finally time for the prize ceremony and Gabi got a big cup, which you can see on the photo with Gabi, Tiffany and Stefan. The excitement among the Swedes was great and a proud Gabi enjoyed the cup. We had partly come to Neussen to celebrate Gabi and Tiffany, and Carin had said that if Tiffany would win the cup she was going to drink champagne from it! And now Tiffany had won the cup – so Carin had to do what she had promised! Gabi and Stefan had bought lots and lots of champagne, and not just any kind of champagne but a really nice one. The whole group once again met at the bungalow to celebrate Gabi and Carin finally got to drink from the cup. Thank you Gabi and Stefan – the champagne was great.

Sunday and the second show day. Also this day the bichons were among the first to be judged in the ring and as the day before we could all relax in the bungalow until it was time for the finals. Once again we ate some good cookies and then we had lunch which consisted of lots of good cheese that Lene and Tommy had brought from Denmark . We had thought that we could have the cheese after dinner one evening but as you can understand we had so much good food during our stay that we wouldn’t have been able to eat all cheese then. You can say whatever you like about Danes but they sure know about cheese and Lene and Tommy had brought delicious cheese with them. Then it was time for the finals and time for the breeder’s groups to be judged. What kind of a breeder can ever think of having all dogs that are entered to participate in the group (all except Salli who was too young). That’s right, it was the Harde family. After training during lunch time (because everything has to be done in the correct way in this family) the breeder’s group from Hardy-Flap’s kennel made it’s entrance with 7 dogs. They sure made some attention among judges and competitors. Unfortunately they didn’t get the opportunity to show the dogs walking on a row, since there was too little room in the ring. The group was placed second at this show. Congratulations! At this show there was only one shop, in which they sold the ordinary stuff with bones and leashes – well you know what they usually have. But in this shop there was one thing that I considered to buy to Simba. It was a really nice dog bed. Yes, it was really nice but Simba will not get it since it cost 250 euro. After the show most people left the show and the hotel, but we didn’t. We had decided to stay one more night at this wonderful place. So in the evening we all went to the restaurant together and had a nice dinner and a really nice dessert. And what do you think we did then? Yes, we went to the bungalow and drank more champagne. In the evening we said good bye to Gabi and Stefan. They were leaving early in the morning. I’m sure that all of us that met them are looking forward to meet them soon again. After yet another breakfast we began our journey home. You can summarize this trip in the following way – good friends, lots of laughter, good food and good drinks. I also want to thank you Carin for offering to travel in our car and share the driving with me since I didn’t have any experience of driving in Germany. It felt nice.
Ann-Christine Cecilia and Madeline 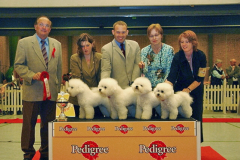 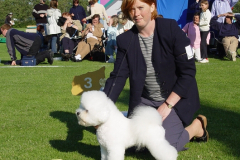 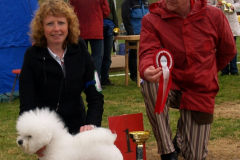 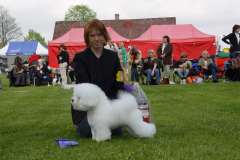 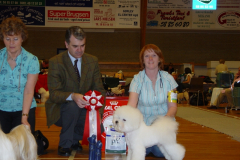 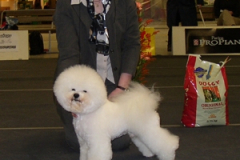 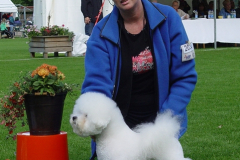 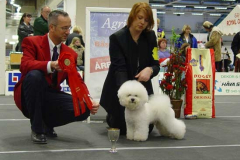 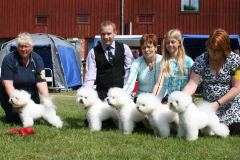 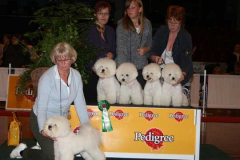 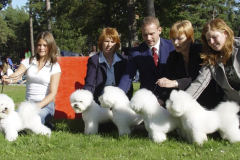 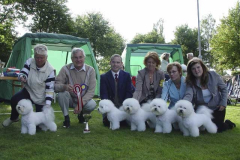 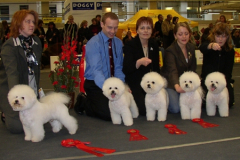 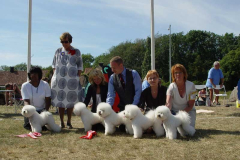 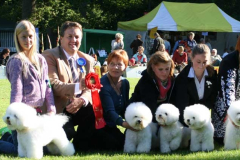 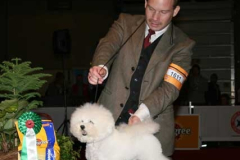 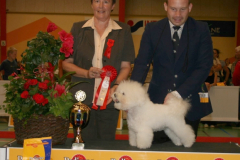 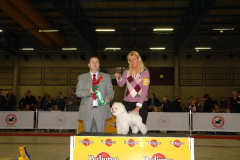 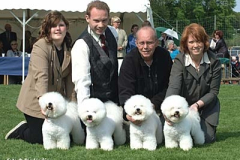 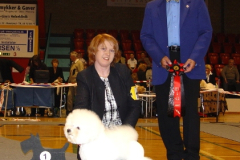 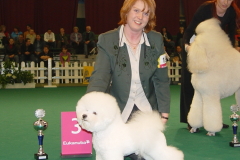 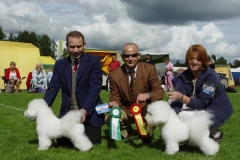 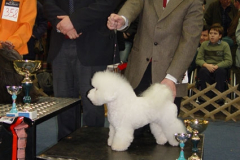 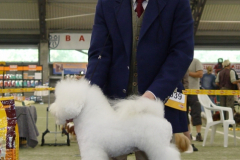