Early Saturday morning we all met at the Svågertorp train station. It was me (Marita), Madeleine and Stefan and the dogs, Mille and Lara that went by train to Copenhagen airport. Everything went well, we were there on time with no delay at all. I was a bit worried whether Mille would be able to get into the small bag but it all worked out nicely with no problems. Lara and Mille enjoyed the flight. When we arrived in Luxembourg the weather was grey and it looked as if it was going to rain and we had not brought any umbrellas with us. Stefan went to buy one but returned after a while with no umbrella – the only umbrellas to be found at the airport were black lady umbrellas with pink elements which cost 43 Euro. A little too expensive! The weather was ok and we didn’t get any rain during our stay in Luxembourg so good for us that we didn’t buy any umbrellas!! First we had to find our hotel. The information we had said it was situated about 200-300 m from the airport. After some searching we finally found it. The room was really tiny but ok. We took the dogs out for a little walk and then I and Madeleine took the bus to a shopping mall in the centre of the city, about 100 m from where the dog show was held. Madeleine loves to shop so of course she bought some clothes. When we came back to the hotel it was time for me to look after Lara and Mille and Stefan and Madeleine went back to the same shopping mall. We spent the evening enjoying a good meal in the hotel’s restaurant and later we made sure the dogs were in best condition for the show the following day. We also had time for some singing and story telling – which I can’t reveal more about!!

The day
Rise and shine. Early in the morning we took the dogs for a walk and then we prepared them for the show. At 7.30 a friend of the Harde family picked us up and drove us to Luxexpo show. At the show we went to the ring and unpacked our stuff. Stefan left to deal with some paper work. A man and woman with a bichon boy stood beside us, and since they spoke French there wasn’t much I understood. But all of a sudden the bichons ran off and said hi to Madeleine and when the owners called for him I understood who it was. They called Giny, and that is the name of Mille’s brother. I know a little French so I tried to introduce myself and told them that they were standing beside the brother. Then Stefan came back and he also got to meet Giny and his owners.

Time to compete
The judging has started and soon it’s time for Mille to compete and in his class there is also a male from Belgium. After each dog has been judged, Mille is picked as the winner and wins the CC making him a Luxembourg champion! In the next class it’s time for Giny. Unfortunately he is beaten by a German male but he gets the r-CC. Then it’s time for best male and once again Mille is the winner with CACIB. Then it was time for the girls and we all hoped that Lara would do well in the ring. Lara competed against a Belgian champion bitch and she won the class with CC which made her a Luxembourg champion. In best bitch it was Lara and a bitch from France that competed and Lara was the winner with CACIB. At the end it happen… The thing that I was afraid of… Both Lara and Mille had to go to the ring at the same time and I’m not a handler! How would this turn out! In the competition for BOB there were also 2 juniors, one from Belgium and one from France , that competed together with Mille and Lara. Stefan took Lara and I had Mille. When the dogs were standing and the judged once again went over the dogs she wanted us to change dogs, so Stefan took Mille and I took Lara. All of it ended with Mille winning BOB and Lara BOS. Just think that we went from Sweden with two dogs and they ended up as number 1 and 2! Both became Luxembourg champions and both won the CACIB. In the group Mille wasn’t placed. Stefan had also entered to couple class, there were about 45 couples and our team was much appreciated by the audience. They were among the 7 best, but wasn’t placed (in Luxembourg only 3 were placed). But I think they became favourites among the audience. Happy and content with the success we said good bye to Mille’s brother Giny and his owners. Then we went with Istvan to his and his partner Stefan’s home in Germany. On the road we were stopped, first I thought it was the police but it wasn’t it was the customs that wanted to check the passports. Luckily Stefan had it all organised. At Istvan’s and Stefan’s place we enjoyed a magnificent meal with goulash soup and as a dessert apfelstrudel with among other things vanilla ice cream and strawberry jam. After a few hours with good food and pleasant conversation we were driven back to the hotel. Tired but very happy we fell a sleep smiling.

Going back home
On Monday we put all our stuff together and went to the airport. The plane was two hours delayed but at 2 o’clock in the afternoon we were once again back in Sweden with our two new Luxembourg champions. Congratulations Mille and Lara!! 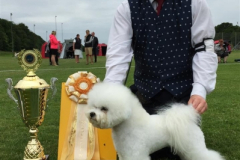 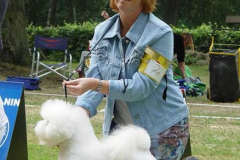 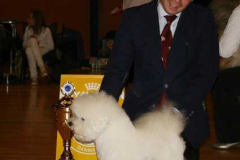